BARDO is an intentional micronation.

The term micronation, which literally means small nation, is a neologism. It is an entity that claims to be an independent nation or state while not officially recognized by governments and big international organizations.

BARDO was born on February 20, 2020 as intentional micronation with the precise objective of uniting artists, free thinkers, holistic healers. But we have been active from 2013 as cultural association with a lot of events and projects.

The creative freedom of thought and action is the passport to join BARDO.

Together with respect for nature and for the planet that hosts us, the only true Kingdom to which we refer.

The coat of arms of the micronation is deliberately a call to noble heraldry in fact, but this does not mean that the duchy is monarchic: the citizens of BARDO are libertarians and the titles acquired are exquisitely Dadaists.

Life in the Duchy passes out of the time of modern civilizations, but it reclines to the rhythms of nature as in a contemporary monastery where daily practice and a primeval spirituality come together to create moments of pure wonder, art and beauty. Whatever you are doing like keeping a healthy wood or doing an ambient electronic music concert. This is the Bardo, a place where utopia has come true.


H.G. the Duke Piercarlo v. Bòrmida at Centro Panta Rei for the talk about new forms of communities, thanks to AWARE - Bellezza Resistente for the opportunity and all people was there for this interesting meeting.


This year we met a traveller, a very special soul on the road who has reached the whole world from Piedmont: it is no coincidence that his name is Vagamondo, you can find their books online.

He is the founder of Meraki community

and part of Tribù Sanacore with other fellow voyagers.

We decided to give him a unique honor

because his story is incredible and his energy inexhaustible.

Thanks to Teatro Selvatico  for bringing him at Bardo.


The Duke of Bardo signed a mutual recognition

treaty with the Empire of Imvrassia,

a micronational polity with territorial holdings in

Founded in 2011 by Emperor Aggelos I as a principality,

Imvrassia is now formed as a unitary and constitutional monarchy,

and is a founding member of the League of Hellenistic Micronations.

The workshop organized by Teatro Selvatico

with Centro Panta Rei (PG-Italy) was a success:

The Bardo's microfestival of Ambient music is back:

An unmissable live event to really touch the experimentation of contemporary artists who imagine the future and make it present.

Directly from Mexico to the Bardo Duchy

in collaboration with the Teatro Selvatico

"The killing of 140 pets in a shelter is not considered a serious and irreparable damage by the Lazio TAR - La Sfattoria degli Ultimi".This creates a precedent that in addition to being terrible in this case can become pure madness for the future of all those who care about the welfare of their animals, especially in Sanctuaries.

The Duchy of Bardo supports the sanctuary of La Sfattoria degli Ultimi, aided by any means possible.

You can dot  it too signing the petition:

Save these animals from slaughter

this year the NaturArte Festival was great!

Thanks for being with us at Bardo to celebrate it.

Our duchy is reaching a lot of acclaim around the world, thanks to everyone for believing in the future every day.

Eirene, dance for the Earth


Our friends of the Ganden monastery have left the duchy: but they will return to India with a tribute that will carry the sign of our friendship beyond the borders of the national states, the flag of Bardo.
The symbol of the sun and the black star will wave again as a reminder of the freedom of peoples, and this time in lands far from our small homeland.

A special day to embrace nature like a wave, feeling safe...

THE IDEAL FESTIVAL: ALETHÈIA | 6 7 8 May 2022 | PRESENTATION
Friday 6 May Rampa di Francesco di Giorgio Martini at 5.45 pm
Something epochal will happen in URBINO - CITTA' 'IDEALE on Friday 6 May 2022, in fact we will ask WIKIPEDIA with sympathy to change the definition of micronation.
-to cancel: "A peculiar feature, in fact, is the lack of diplomatic relations with the national states and with the major international organizations"
-and leave: "OTHERS ARE ALSO BORN AS A CULTURAL PROPAGANDA VEHICLE" FIND OUT WHY AND WHY AT THE PRESENTATION of the ALETHEIA FESTIVAL - FRIDAY 6 MAY at 5.45 pm - FRANCESCO DI GIORGIO MARTINI RAMP - MARKET ENTRANCE / RESERVED only for those who provide the PASSWORD 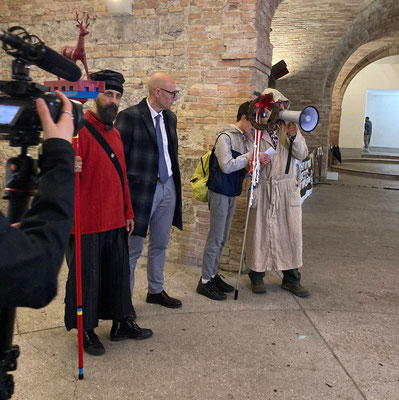 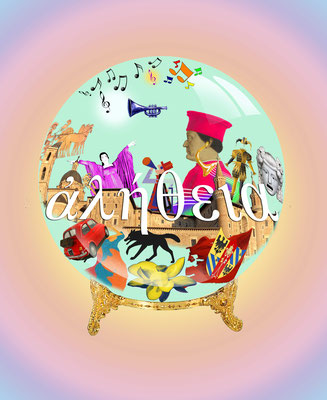 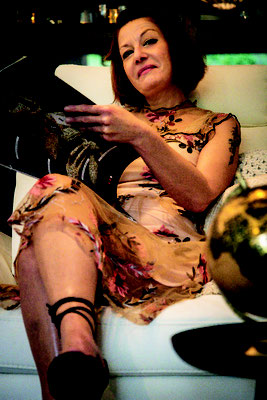 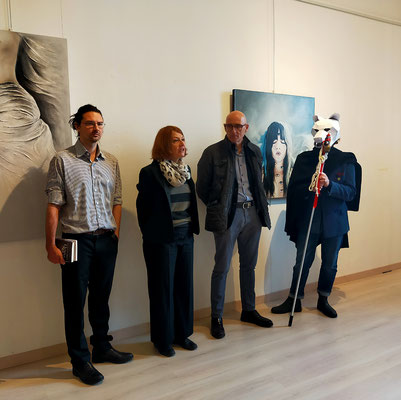 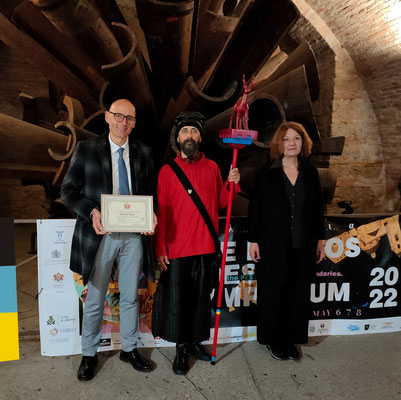 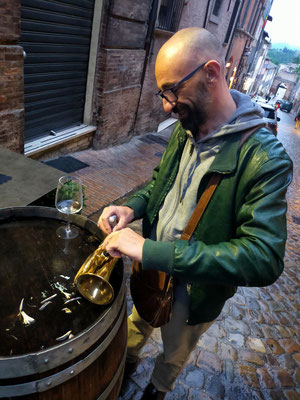 
BARDO is proud to announce a new exceptional citizen: Lord Dunsany has enthusiastically accepted the honorary citizenship of the Duchy, and this is only the beginning.

Randal Plunkett (film director/writer and metal-fan) has transformed 700 acres of his park 40 kilometers from Dublin into an area of rehabilitation and recovery of wild animals: forests, meadows, streams and wild streams finally welcome free animals. Yes, because Lord Randal has banned hunting by virtue of the freedom to live.

«It should be a common practice» says the 21st Baron on VanityFair: «I want to help change things».

Italian deathsers Jumpscare, in collaboration with the Duchy of Bardo, have released the video visualizer of Earth Decay, a track extracted from the album 'Don't Close Your Eyes', directed by Luigi Cervellini (LB Studio) and produced by the band itself. The video visualizer aims to raise awareness of the harms of pollution and climate change, today as support to Bardo commitment for the environment.

Bardo officially against the plan for culling of nutrias

the micronation offers itself as a place of refuge for these unwanted animals to the Magliano Alpi municipality.

The Duke of Bardo on Microcosme.info

Many thanks to Palais Princier d'Aigues-Mortes et Olivier Martinez, Bardo returns to talk about himself: the Duke was interviewed on Microcosme.info in a report that sees Italy as protagonist with our Duchy and Alcatraz Republic of Jacopo Fo.

A new Nobility is born

It is not your (micro)nation that makes the lineage noble,

but it is you who makes the (micro)nation noble.

The granting of noble titles instead belongs to the Sovereign, but all citizens of Bardo have the right to wear a personal coat of arms.

and visit the Bardo Duchy.

The Principality is a micronation founded

The Duke will play live as Bòrmanvs

during the Vegvisir Dark Ambient Festival

Waiting for next NaturArte Festival at Bardo

with Wintercroft masks was a success!

Bardo hosted as usual his art collective for the preparation of the act: Mondovì was conquered!

The project combines the need of those who love nature but live in the city, of those who love animals and feel they have a strong sense of belonging to the land but cannot yet do it in a constant and total way.

ABDUCTION connects volunteers and natural artistic and rural projects by promoting educational and cultural experiences based on a non-profit exchange of trust, to help on building a sustainable glocal community.

Who is an ABDUCTED: a person visiting the micronation who offers their time in daily activities in exchange for experiences and practicing sustainable lifestyles.

* Please note that ABDUCTION is not a paid job - hosts do not offer monetary compensation!

of great popularity: we are honored to have among us another special artist who has decided to return to country life.

Order of the Black Star - Chivalry of Arts

We live in an age where mediocrity often triumphs, but we at Bardo promote quality and belonging to a reality that is nourished by the love for beauty: the College of the Chapter is proud to present Emiliano Mondini, the first Knight is witness to this commitment of fidelity to the only kingdom that we recognize, Nature, mother of all arts. And to the Duchy, of course!

If you feel to became a citizen, do not hesitate to ask for a citizenship fee and join BARDO.

Adhering to citizenship has no cost, and you will receive your digital certificate by email. The official metal pin is available and you can order it from the shop.

With your offer you will sustain the rewild project of our Duchy.

We are waiting for you,

Estense Consul of Grand Duchy of Flandrensis sign the treaty of reciprocal recognition with the Duke Regent of BARDO Intentional Micronation for their positive actions against global warming: today is a great day for our micronations.

Do you live in a house or appartment you own? You are convinced that is the only state border that you really feel like your?

Why don't you choose to become part of the project 'BARDO Archipelago'?

Our micronation is made from islands of freedom and it is in constant evolution. If you share our intent with us, you are welcome: don't hesitate and join BARDO to be part of a real state of art.

We are a micronation who grows like a plant pointing to the sun.

Send us an email by contacts link and we'll send them to you for free!

Other websites in our network